Other benefits include: an increase in orders and significant reduction in material waste and overtime hours, due to more accurate and transparent costing and capacity forecasting; and a happier workforce with the introduction of scientifically assessed fair and achievable performance incentives. 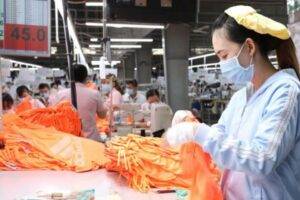 Since its inception in 1979, the company has achieved steady growth, and now boasts an annual turnover of over $130,000,000. Customers include: CSW, Adidas, New Balance, Eddie Bauer, SanMar, Kohl’s and JCP, and it is listed as one of Vietnam’s Top 500 largest enterprises. Thanh Cong has additionally won a variety of awards, such as: Eddie Bauer’s Product Quality and On-Time Delivery Award; JC Penney’s Operational Excellence Award and a Gold Brand Certificate Award from Ho Chi Minh City.

Prior to implementing Coats Digital’s SaaS-based cost optimisation solution, GSDCost, Thanh Cong, based its cost and capacity forecasts on inaccurate historical data stored on a variety of Excel spreadsheets which were notoriously difficult to update in real time across all costing, capacity planning and manufacturing teams.

With rising CM costs in both labour and raw materials and a high variation in production quality, due to time studies based purely on historical experiences, Thanh Cong needed a standardised solution that would accurately record SMVs through effective, standard motion digitised codes so it could optimise its costing processes, significantly enhance global manufacturing efficiencies and ultimately ensure it remained profitable in a highly volatile industry environment.

Following the implementation of GSDCost, Thanh Cong was able to establish international standard time benchmarks based on standard motion codes and predetermined times. This enabled the sales, costing, planning and manufacturing teams to communicate efficiently using the same language, based on a scientific method for correctly analysing manufacturing costs.

As a result, business units could confidently and fairly negotiate product prices with customers, and a more succinct single view of overall CM costs enabled Thanh Cong to realise a production efficiency increase of 13.82%.

In a nutshell, because capacity planning and material requirements were based on real forecasts, Thanh Cong not only benefited from reduced material wastage and overtime staff costs, but also avoided having to pay extra high shipping and air-freight charges, as orders were significantly less likely to be delayed.

Thanh Cong reports that an initial analysis of 22,000 pieces resulted in an equivalent saving of $12,000 as a result of higher efficiency cost planning, and the absence of emergency costs, previously required to deliver orders on time.

An open and transparent production capacity platform has also enabled Thanh Cong management to set achievable productivity goals based on a fair standard of working hours.

The introduction of achievable performance incentives has consequently greatly improved staff morale and motivation, as goal setting targets are now based on realisable targets.

This use of a common language and standards supports accurate cost prediction, fact-based negotiation, and a more efficient garment manufacturing process, while concurrently delivering on CSR commitments. Coats Digital’s enhanced feature of a globalised Fair Wage Tool combines the international standard time for any given style, with detailed factory efficiencies, contracted hours and the fair living wage for the country (data provided by the Fair Wage Network). This added tool enables brands and manufacturers to quickly agree the fair living wage allowance for any given garment, in any factory in the world.

GSDCost is the only globally recognised international method-time-cost standard to successfully achieve cost optimisation and sustainable improvements to productivity. We certainly have not been disappointed.

Coats Digital’s latest SaaS version of GSDCost has enabled us to not only increase our overall efficiencies by a staggering 14%, but is set to very positively impact our bottom line, by saving us the equivalent of $12,000 for 22,000 pieces following the initial analysis.

We are delighted that Thanh Cong has realised such fantastic efficiency results and significantly increased its profitability as a result of implementing GSDCost.

Thanh Cong’s planning and sales teams were quick at learning how to get the most out of the GSDCost solution and its waste reduction achievements and increased transparency around labour costs, will greatly support the company and its brand partners’ social responsibility goals to meet increasing consumer demands for a more transparent, sustainable and ethically responsible apparel supply chain.

GSCDCost will undoubtedly bring us more business opportunities as we can quickly respond to order requests, realistically take on more business, and know that we can meet promised delivery targets, every time.

Another great advantage is that there is no longer any disagreement between the sales and production teams regarding cost plans, which means a much more peaceful working environment, where staff can occupy themselves with more meaningful activities to enhance the business.

Our staff are also enjoying working towards incentivised good performance targets, based on real and achievable goals.

Find out how GSDCost can benefit your business, click here.